Seeing Cathy Richardson sing is an experience that is difficult to explain. Critics have described the effect in ways such as: witnessing a space shuttle launch, a force of nature, kinetic, unleashing a tsunami from her iron-lungs, haunting, stunning, breath-taking power, unbelievably powerful, or simply stated, WOW. Some have even gone so far as to dub her the “best female voice in rock today.”

And it’s no wonder, what other singer out there can you name who has the chops (or the balls, for that matter) to stand in for both Janis Joplin and Grace Slick in their iconic bands? 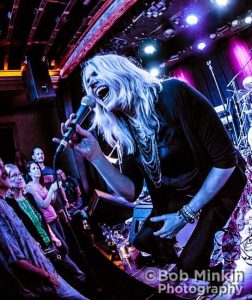 Yes, it’s true, GRAMMY Nominee and four-time DIY Music Award-winning singer, songwriter, musician, producer, actress and designer Cathy Richardson independently released and sold over 30,000 copies of her seven solo albums and relentlessly pummeled the Chicago club circuit for years. Over the last decade, her career has taken a few colorful turns that steered her out of the local scene and into the International spotlight, smack in the middle of the rock n’ roll history that inspired her to rock.

Cathy made her legit stage debut starring in the singing role of Janis Joplin in the musical Love, Janis. The play, conceived by the Joplin estate, is centered around letters that Janis wrote to her family during her meteoric rise to fame through her sudden, tragic death. The letters are performed theatrically by a speaking Janis and 19 or so of Joplin’s classic tunes are rocked out live by a singing Janis and band. Cathy played Janis in Chicago, Sag Harbor, New York, the original Off Broadway cast at the Village Theatre in New York City and, most recently, at the Marines Memorial Theatre in San Francisco. She also performed the role in Tucson and Phoenix.

The San Francisco Chronicle said, “when Richardson pours her magnificent, flexible voice into one of Joplin’s signature numbers… the experience is more real than any live recording ever captured.” 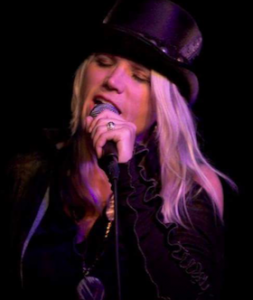 In 2007, she toured the US with Janis’ original band members Big Brother and the Holding Co. on the Summer of Love 40th Anniversary Tour.

Headlining that tour was the legendary classic rock band Jefferson Starship, led by founding member and Rock Hall Inductee Paul Kantner, who took note of Richardson’s show stealing performances with Big Brother and, consequently, asked her to join them the following year. Music critic Greg M. Schwartz at Bullz-eye.com named Richardson Breakout Artist of 2008 for her work with Jefferson Starship, who released their first album in over a decade, Jefferson’s Tree of Liberty and toured the US and beyond, from Tokyo to London.

2009 ushered in the 40th Anniversary of the famed Woodstock Music and Art Fair and Richardson, who was born in 1969, once again found herself in the spotlight standing in for another one of her musical heroines (this time the inimitable Grace Slick) on the Heroes of Woodstock tour. Headlining major venues across the United States and Europe, including the site of the original Woodstock in Bethel, NY on the actual anniversary, Richardson sang with Jefferson Starship playing the set that Jefferson Airplane played when they headlined the original Woodstock in 1969. 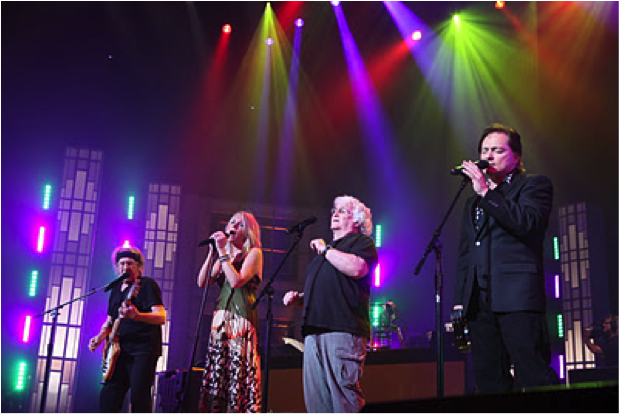 Richardson fans will likely be thrilled her by her next major musical endeavor- The Macrodots, an amped up, hard-rocking collaboration with San Francisco guitarist/songwriter/producer Zack Smith. Their self-released debut album the Other Side, has been receiving critical acclaim and despite playing only a handful of shows, so far, they’ve already sold over 1000 copies. Richardson and Smith have put together a stellar cast of superstar players for the live show and to collaborate on new material- Jude Gold on guitar (besides being a monstrous player, he’s the Director of the Guitar Institute in LA and a longtime editor at Guitar Player Magazine) Greg Panciera on bass, Steven Gillis on drums (a veteran of hit hard rock act Filter) and Anne Harris on fiddle. On West Coast shows, Jefferson Starship drummer Donny Baldwin takes over the kit. For more on the Macrodots, visit http://www.themacrodots.com

CATHY RICHARDSON is an award winning music artist, graphic artist, and clothing designer. Her professional credits include fronting her successful rock band, producing and releasing seven albums on her various indie record labels. She was nominated for a GRAMMY Award for Art Direction of her band’s 2003 release, “The Road to Bliss.” “The Road to Bliss” also received two DIY Awards (Do It Yourself in Film, Books and Music) for Album Art of the Year and Producer of the Year. Her latest release, “Delusions of Grandeur,” topped the 2007 DIYs when she won both Album and Producer of the Year.

Why Richardson isn’t a bigger star than she is remains something of a mystery, for her charismatic presence and far-ranging voice would rival even Joplin. 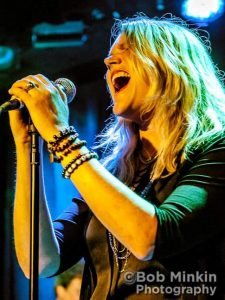 And it’s on the vintage numbers- not just the predictable ‘Somebody To Love’ but a strident run through Quicksilver’s ‘Fresh Air’, that Richardson comes into her own, becoming a great rock frontwoman rather than just a slick Slick imitator. By the time we get to ‘White Rabbit’, she’s leaning into the first two rows (which, as anyone who’s been to the Borderline will tell you, are pretty damn close to the stage) intimidating the poor hapless souls who dare to get too close. Personally, considering the remarkable resemblance she bears to Linda Hayden circa 1975, I wouldn’t mind – especially with that voice.

“when Richardson pours her magnificent, flexible voice into one of Joplin’s signature numbers – the experience is more like hearing Janis live than any recording ever captured.”

Robert Hurwitt of the SF Chronicle

wrote, “Richardson goes a long way to re-create (Joplin) with some astounding replications of the singer’s work. There are times when you can close your eyes and swear you are listening to the real thing.”